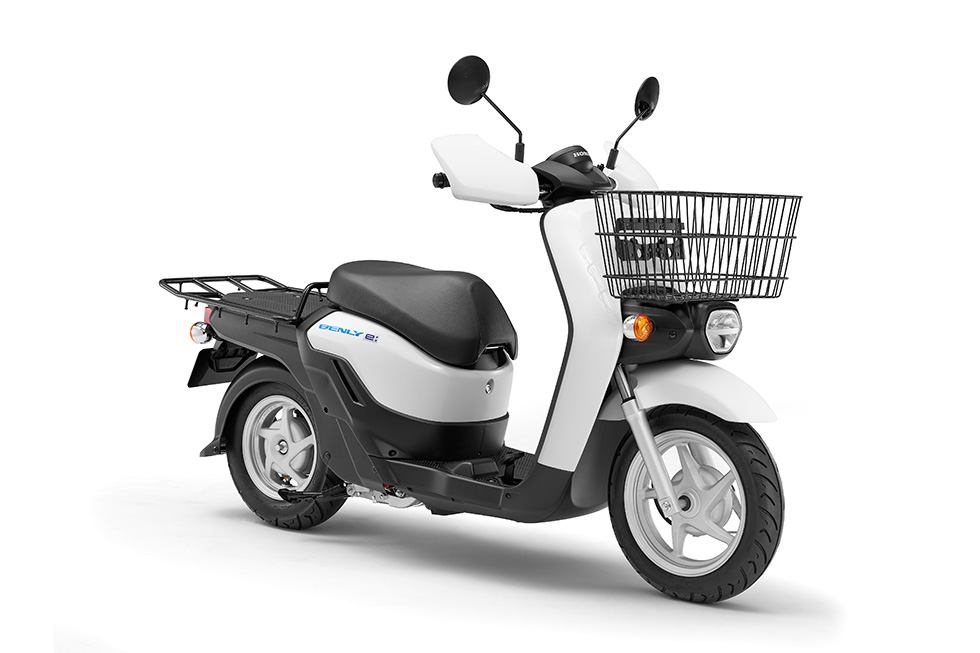 The prototypes of Honda, a well-known two-wheeler, are firstly the CR electric dirt bike and the electric scooter Benly e. The Honda Benly e electric scooter was recently observed testing at the Pune facility of the ARAI (Automotive Research Association of India). The Tokyo Motor Show 2019 made its debut.

Honda had said it will import a two-wheeler from China to test in India and the Honda Benly e can be expected to be one. The removable battery pack known as Honda Mobile Power Pack is one of the Highlights of Honda Benly e. Team Red has previously concluded a contract to create a common battery swapping technology with KTM, Yamaha, and Piaggio. In addition, the Big Four (Honda, Kawasaki, Suzuki, Yamaha) have also created a similar partnership. This provides Honda a wonderful chance to test its battery swapping technology in India with the Benly e.

The B2B (business-to-business) EV industry has grown significantly along with the popularity of consumer-driven electric mobility solutions. In addition to the subsidies, the government may soon waive the registration costs for electric vehicles. Many B2C firms have already committed themselves to introduce electric vehicles in their logistics network.

This Benly e electric scooter is designed for commercial use and will likely include swappable batteries to make it easier for delivery drivers to recharge them without having to wait for them to be fully charged. The battery can be swapped out in a matter of seconds instead of minutes or even hours. While looking for its features, a telescopic fork is in the front and there’s a mono-shock at the back. The front wheel is 12 inches and the rear wheel is 10-inch.

Taking advantage of the benefits of zero CO2 emissions, ultra-quiet operation, and no exhaust fumes, the Benly e: is ideal for early morning deliveries and food delivery. This model’s cruising range is ideal for business use, convenient charging and reverse-assist position it as an EV scooter that makes delivery work smoother.

There are four Benly e models to choose from: the Benly e I, Benly e I Pro, Benly e II, and Benly e II Pro. The Benly e I and e I Pro come with a motor of 2.8 kW, which produces 13Nm and the e II duo has an electric motor of 4.2 kW, which develops 15Nm. All versions come with removal batteries of Honda Mobile Pack.

Benly e I and Benly e I Pro are able to go up to 87 km at a single charge and provide a top speed of up to 30km/h in terms of their technical specifications. The 47km range and 60kph of top speeds are available from the Benly e II and e II Pro. The scooters are 12 degrees grade capable.

However, even though the Honda Benly e is more powerful than the current crop of B2B electric scooters available in our market, it will be significantly more expensive. The e-scooter pricing begins at JPY737000 or Rs 4.94 lakh in Japan as reference. This will not work in favor of Honda when companies may pick for more inexpensive choices such as Geliose Hope, Detel Easy Plus, or even the Okinawa Dual that has a comparable range and has a payload capacity of up to 200 kg in spite of the weaker 250 Watt engine motor (versus Benly’s 60 kg). This suggests that the company may be putting its battery technology to the test with the Benly e.

The best option for Honda is to use a present platform for entering an Indian electric two-wheeler industry. A good example of this is the Suzuki Burgman Electric and the Hero eMaestro. It’s possible that Honda will follow Suzuki and Hero MotoCorp’s lead, and we’ll see the Honda Activa-e on the road shortly. We’ll have to wait and watch whether the Japanese giant moves to the Activa electric or brings the PCX to India. What we do know is that Honda is clearly speeding up its electric vehicle ambitions for the Indian two-wheeler sector.