A throttle grip accelerates the BMW Motorrad Vision AMBY, while the BMW i Vision AMBY requires constant peddling in order to benefit from the electric motor system's assistance.

By PrasanjitSeptember 8, 2021No Comments8 Mins Read 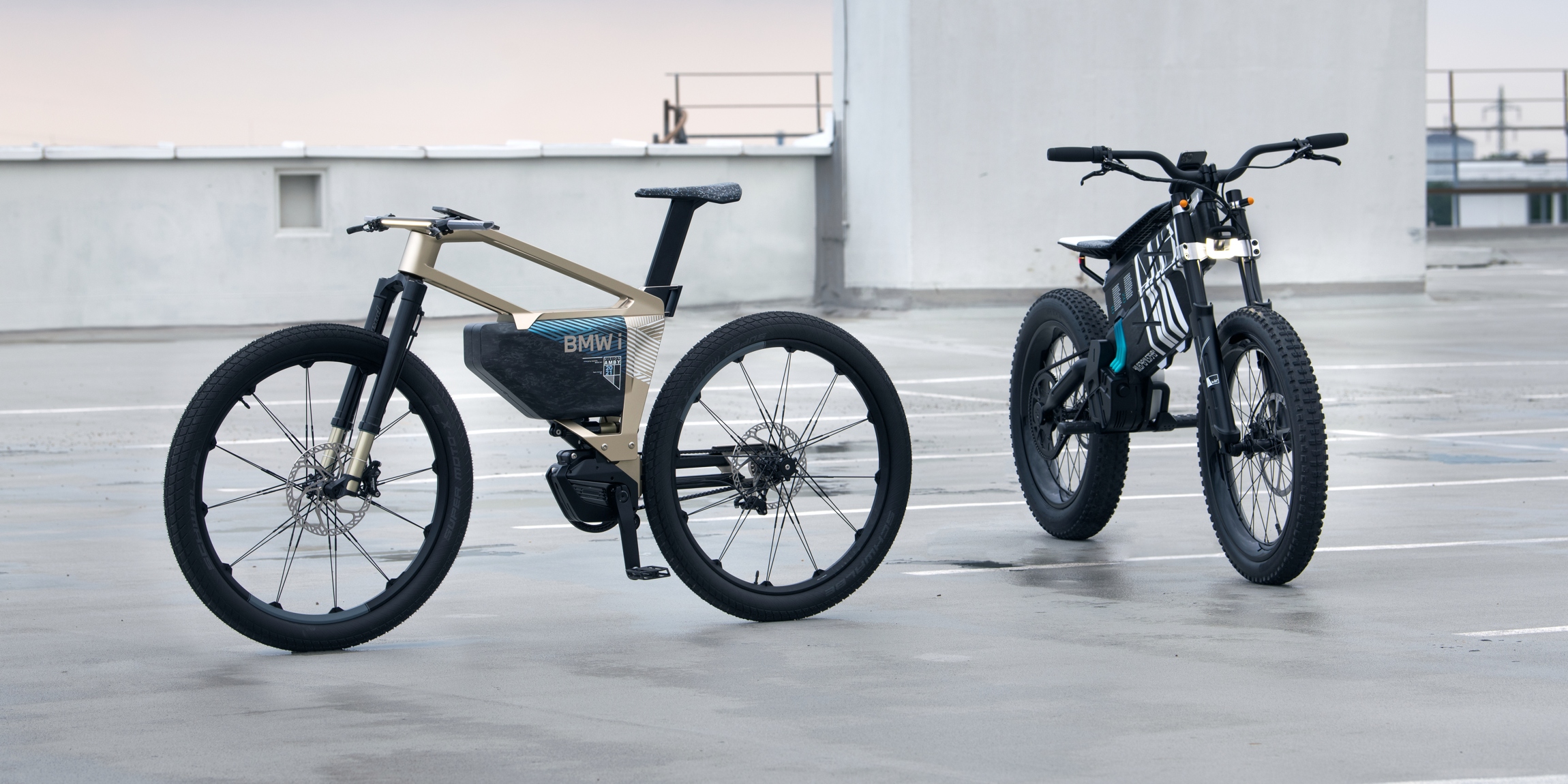 There are two different BMW divisions that have presented the two models on a technical level.

BMW presented the i Vision AMBY, a high-speed electric bicycle.

The BMW Vision AMBY and BMW i Vision AMBY are both electric vehicles having three-speed levels for different types of roads, allowing up to 25kmph, 45kmph, and a top speed of 60kmph, with a range of 300km.

In terms of classification, the i Vision AMBY belongs to the category of electric bicycles, although it has very little in common with its e-bike counterparts. In addition to what appears to be a Gates carbon belt drive, the frame appears to use identical suspension components to other high-end bicycles, but the electronics appear to be wholly unique.

Faster speeds are possible due to the motor’s increased power and the huge 2,000 Wh battery’s capacity. BMW claims that its low-power mode can travel up to 300 km (186 miles) on a single charge, thanks to its large battery.

Riders can choose between the European legal 25 km/h (15.5 mph) speed, a second speed-pedelec mode that reaches 45 km/h (28 mph), and a new high-speed-pedelec mode that reaches 60 km/h (37 mph) using an accompanying smartphone app. BMW also proposed that such speeds be changeable in real-time based on geofencing, which means you might be automatically slowed while entering the city center, then unleashed to your top speed upon exiting onto a broader route.

In addition, this isn’t a disguised electric motorcycle. To power the motor, those pedals aren’t just for show. It will be necessary for riders to pedal consistently in order to reach and maintain high speeds. When traveling at 60 km/h (37 mph), the range rating reduces dramatically to just 75 km (47 miles).

This high-speed BMW i Vision Amby requires a helmet, registration number, as well as a valid driver’s license in order to go at a higher speed.

Its battery is located right in the middle of the frame. Recharging time is about three hours because of the fast-charging technology. The driving unit, which is located near the pedals, only assists when the pedals are turned. The transmission is integrated into the drive system and uses a low-maintenance toothed belt for power transfer. The rear wheel is connected to the frame by a single-sided swinging arm, which is exclusive to BMW Motorrad. At speeds up to 60 km/h(37 mph), 120 mm of front and rear suspension travel is perfect for all applications. In order to offer more comfort and safety at higher speeds, the vehicle is equipped with larger and wider tires on the 27.5-inch wheels.

The bike also has LED light bars integrated into the handlebars and seat post, as well as an angular frame with a tucked-in seating position, among other fascinating design characteristics.

Easy removal of the rear wheel with the central fastening allows for maximum ease of transportation. Similarly, the wheel in the front suspension fork can be removed in the traditional manner using a screw. The lightweight construction, along with the option to remove and store the battery separately, results in a more compact design.

Other technological functions that could be included in the BMW i Vision AMBY are an ABS system optimized for bicycles, an automatic high-beam assistant and brake light assistant, and a daytime riding light – all of which could increase safety. A tire pressure monitoring system similar to that fitted to BMW Group motorcycles is also a possibility. Meanwhile, a proximity radar operating over a range of up to 140 m gives the user a visual and acoustic warning (via the app) of vehicles approaching from the rear and rounds off the range of possible safety features.

The highest speed mode certainly doesn’t fit into any current legal designation for electric bicycles though.

“In the absence of any existing legal framework for a vehicle of this kind with a modular speed concept, the “AMBY” Vision Vehicles set out to prompt the introduction of such legislation and, by consequence, developments of this nature.”

Vision AMBY looks like a bicycle, but it’s in reality a motorcycle at its core. Slender dimensions promise roughness and adventure, while the style evokes a BMW Enduro motorbike. Both the 26-inch front wheel, which has a thinner tire, and the 24-inch rear wheel, which has a more rounded tire, are equipped with hefty treads. The firmly integrated seat with a height of 830 mm is just as typical a motorbike feature as the fixed footrests.

For road and off-road riding, handlebars are ergonomically situated and at the proper height. An angular U-shaped BMW Motorrad light signature is visible on the bike’s front end and the double LED element as a tail light. Last but not least, this is a clue as to where this concept of the electric bike came from. The bike’s massive front forks are another distinctive feature. These are protected by thick protectors, which give the bike a more rough appearance and feel.

While the BMW i Vision AMBY as a high-speed pedelec requires constant pedaling in order to gain assistance from the electric drive, the BMW Motorrad Vision AMBY is accelerated using the throttle grip and has footrests instead of pedals, as is typical of a motorcycle.

From what we’ve heard from WMTC, the bike has a range of about 110 kilometers. Depending on the type of track, three ride modes are available, allowing for a variety of speeds. A sophisticated mechanism in the bike detects the type of terrain. The speed is then adjusted as necessary. If you’re on a bike path, you can go up to 25 kmph. There is a 45 kmph top speed for city roads, and a 60 kmph top speed for out of town / multi-lane roads.

On the Vision AMBY, the battery and the drive unit are merged into a compact case at the center. 65 kilograms is the overall weight of the bicycle. A regular electric two-wheeler is substantially heavier than this one.

BMW Motorrad hasn’t shared any details yet about the motor or battery setup in the motorcycle version of the AMBY concept line, but it will surely pack at least as much capacity as the 2,000 Wh setup in the high-speed electric bicycle version.

The specially developed app enables the user to activate the BMW Motorrad Vision AMBY for riding, read in their stored driving license classes and make use of the appropriate insurance cover on an on-demand basis as required. In this way, the app performs the classic key function while also making use of the customary identification options provided by the smartphone such as Face ID. Basic functions and status queries (e.g. current charge status) are available as in the BMW App. Further developments and adjustments to the software can be provided to customers at any time via over-the-air updates.

The smartphone shown in the vision vehicle charges inductively on the magnetic holder in the rider’s lower field of vision. These connectivity options would also allow anti-theft protection and the freely programmable immobilizer to be offered as basic functions.
And the answer to the question “Where is my BMW Motorrad Vision AMBY?” would be just a click away on the smartphone, too.

The bike is future-proof since it can be upgraded with a variety of functions in the near future. Future possibilities include an improved ABS system, a tire pressure monitoring system, and a proximity warning radar, among others.

There are many possibilities for urban mobility in the future. The BMW Motorrad Vision AMBY is one example. They hope it will spur discussions about future-oriented travel in cities, and they hope it will help them do that.